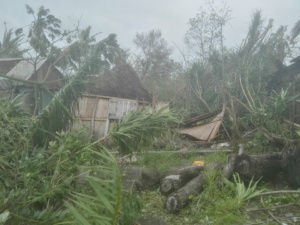 After shaking Mauritius and Reunion Island, the intense tropical cyclone Batsirai hit the eastern coast of Madagascar with full force.

The effects (strong wind and incessant rain) began to be felt from the middle of Saturday 05 February on the northern coasts of the Vatovavy region.

Still, on Saturday at 9 pm local time, the eye (area and perimeter where are concentrated the most extreme conditions) has touched land between Nosy Varika and Mananjary.

As expected, the impact of tropical cyclone Batsirai on Madagascar was violent.

Between Nosy Varika and Mananjary, an area of 70km long, everything was devastated by devastating winds. The powerful cyclonic swell has eaten away at the coasts until it washed away a cemetery in Mahanoro, a town located 80km north of Nosy Varika.

The sea entered inland with a high level of waves of 10 m.

Finally, Batsirai caused heavy rainfall on a large part of the east coast and the southeast.

Houses were swept away, tin roofs were blown off as well as livestock which also perished. On the agricultural side, 80% of the rice fields and food crops were flooded and therefore suffered heavy losses.

In terms of infrastructure, roads have been cut because either trees have fallen to block traffic, or the waters have caused damage and holes on the road.

As a result, the official figures to date (February 11, 2022) have announced 120 deaths and considerable material losses. Nearly 80% of the village of Mananjary, as well as the Pangalana, were devastated.

Concerning the CEIM, out of the 30 churches in this zone, 19 constructions composed essentially of wood were literally razed by the wind, except in Andonaka and Tanambao Berano. The observation is the same as in Mananjary.

As elsewhere, plantations were completely destroyed, domestic animals lost their lives, trees were uprooted and houses were badly damaged. Most of these houses are made of wood or bamboo, very light materials…

In the area where Pastor Eric is located (church of Analajanvidy, Mananjary), 17 houses are all destroyed. Some pictures so that we realize the gravity of what happened on the spot.

Brother Claris said: « I am 71 years old now, but I have never seen a cyclone as devastating as this one ».

STATISTICS OF LOCAL CHURCH MEMBERS AT THE PASSAGE OF CYCLONE BATSIRAI

The MEIM has established 5 priority points for action related to the Christians affected by the cyclone.
1/ Emergency food and basic necessities.
2 / Food support for the most vulnerable people: poor and pregnant women, widows and orphans, sick people without means of care, the poor.
3/ Repairing and building part of the destroyed houses for the servants of God and the affected families
4/ Limited financial and material contribution for the repair and construction of churches.
5/ Donation of agricultural seeds for the future harvest, source of family income.

Please pray for the people and the CEIM community in this area.